Lets start at the beginning, when and how did you and your partner meet?
Brendan and I met through mutual friends. My best friend is married to Brendan’s best friend. While we met initially at their wedding when we were both in their bridal party, we hardly spoke and were dating different people then. Several years later we connected on social media when I was living in Sydney and Brendan was in Adelaide. After six months of a long distance relationship, I relocated back to Adelaide and well, the rest is history.

Tell us about the proposal ..
Brendan and I had already welcomed our beautiful daughter, Olive, into the world so I guess a proposal was imminent. We knew we were going to get married and so we went through the process of deciding on a ring together. The day he got down on one knee though, that was up to him. He proposed with our daughter by his side, at our family house.

The Dress! Tell us about your experience finding the dress .. How did you decide on the one?
Once we were engaged, visiting Calèche was high on my list of where I would find my perfect dress. From the moment I walked into the studio, the whole experience was truly magical. I knew I wanted a figure hugging dress and I knew I wanted lace, but as for the rest of the details, I waited until the perfect dress found me. The trouble I had was that I loved different elements of several dresses. It was at that moment I realised that working with Liz to design my dress would be my best bet. What a wonderful decision that was! I definitely found the process nerve-wracking because you have to use your imagination a bit but Liz was incredible to work with! Design elements were changed throughout including a sheer bodice, the addition of a tulle skirt, and a longer train. In the end, the dress that I was so fortunate to wear walking down the aisle was the dress of my dreams –  unique, flattering, elegant…perfect. I cannot thank Calèche enough! 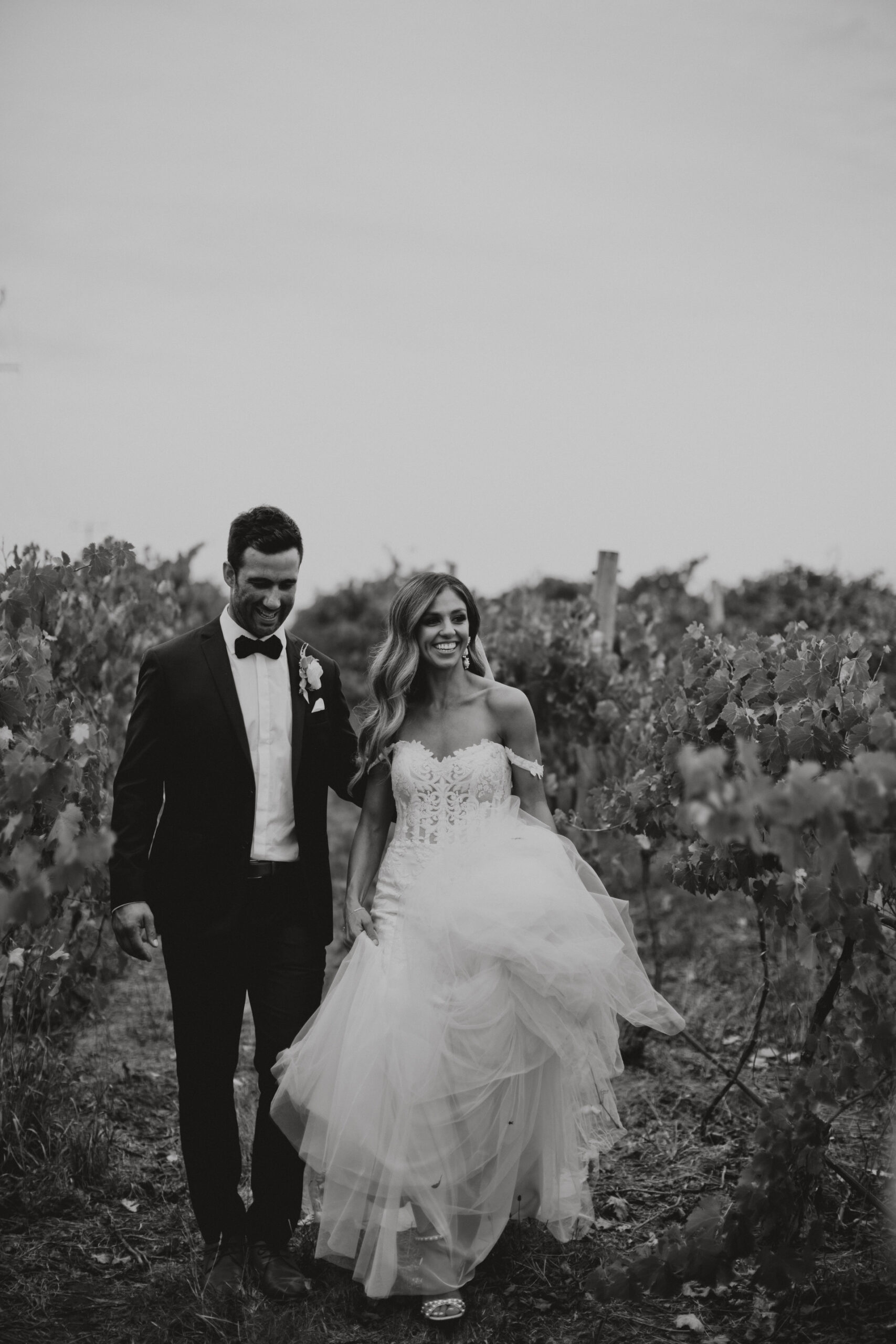 Can you give us some details on your wedding location?
We got married at the beautiful Howard Vineyard in the Adelaide Hills. We fell in love with the venue and the team there from the moment we first visited it. We decided to get married on the back lawns, to be able to have sunlit photos rather than being in shadows and have the beautiful vineyard in the background. The whole day was truly incredible.

What was your favourite moment of the day?
How can I select just one! 🙂 From putting my dress on at our retreat and having my dad see me for the first time, to the moment I walked down the aisle and said my vows to my husband to be, the whole day was unforgettable. And how can I not mention the incredible party that followed!

Hens Day! If you had one, please tell us all about it!
My bridesmaids threw me an incredible “Petty in Pink” garden party at Hula Hoop. The venue was perfect for a long table lunch on a gorgeous Autumn day where there was a “P” theme, since my maiden name also begins with a P. Every guest wore pink while I wore white. I was surrounded by all of my closest friends and family, and even had one of my cousins from the USA travel to be at my Hens Day. We ended the night by going to a Fringe show and stayed the night in a hotel in the city. It was perfect. 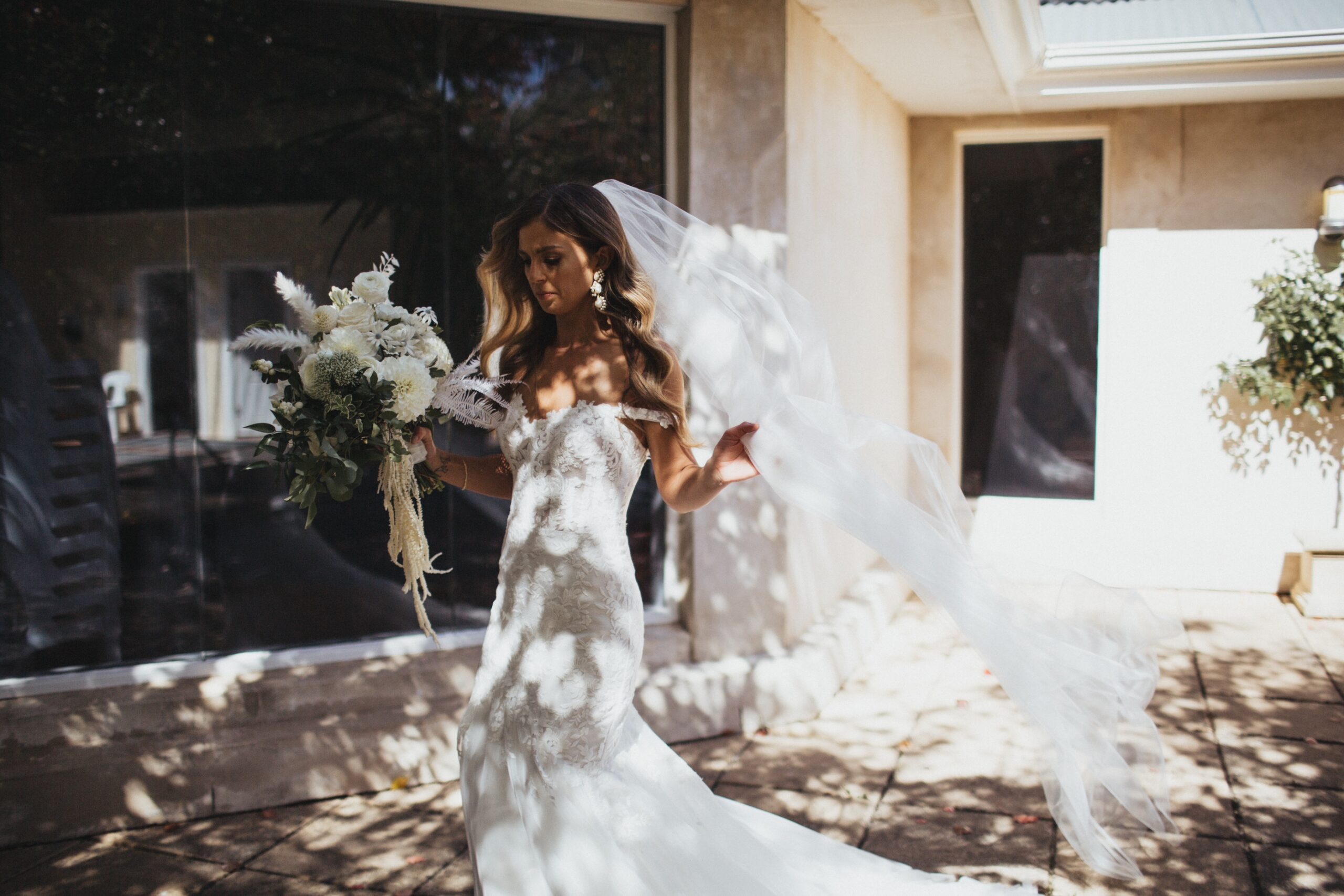 Lastly, is there any advice or words of wisdom you have for future brides?
As far as the dress decision goes, follow your heart with what you want and trust that whatever you choose, you WILL look incredible on your wedding day. You are in very safe hands at Caleche.

Savour every single moment of the wedding planning from the day that you get engaged to the day you walk down the aisle. Then, when it is your wedding day, take it all in. It really goes by so fast. At our wedding reception, my husband and I actually stepped outside for ten minutes and took in the very special moment that it was our wedding day and that we were now husband and wife. 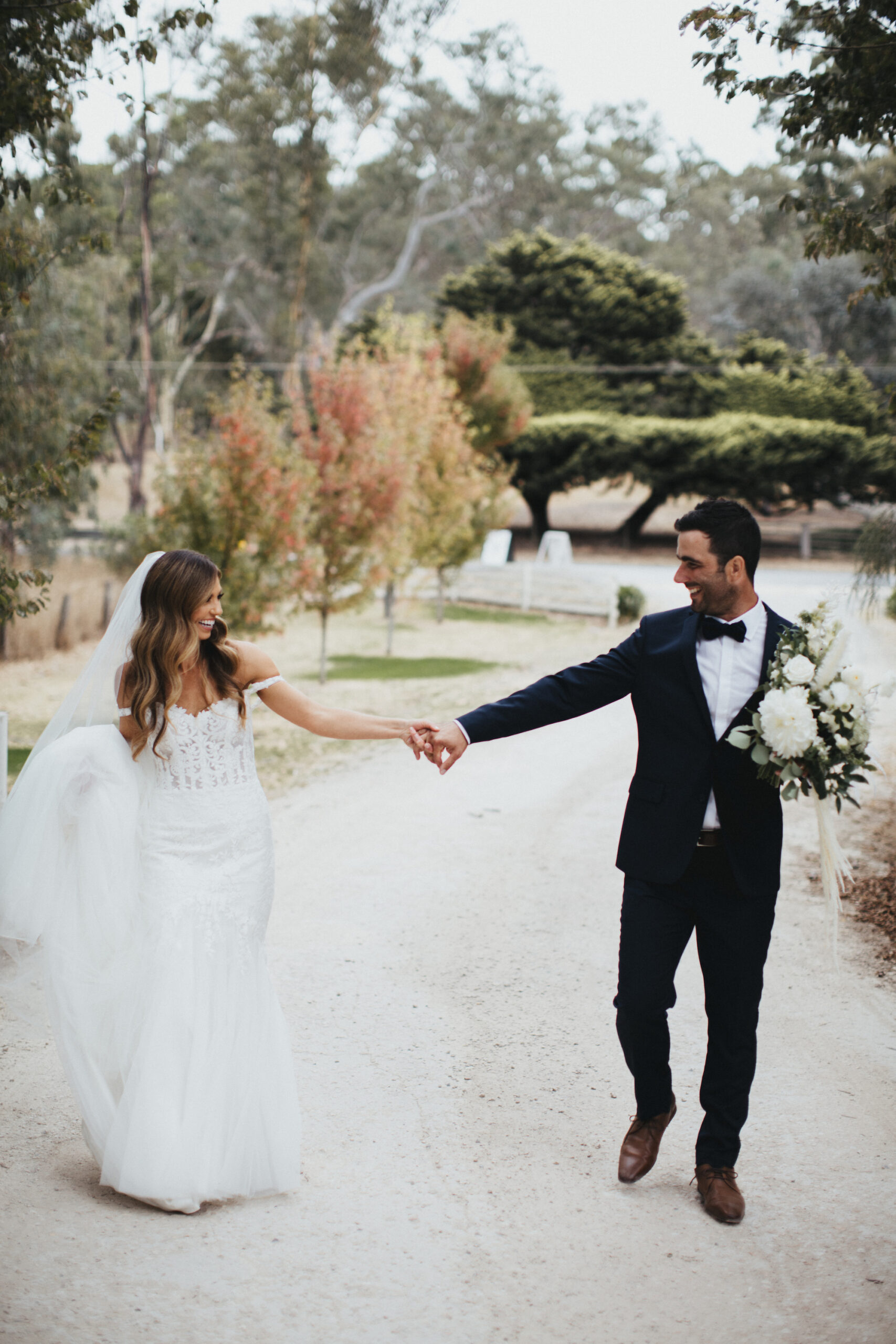 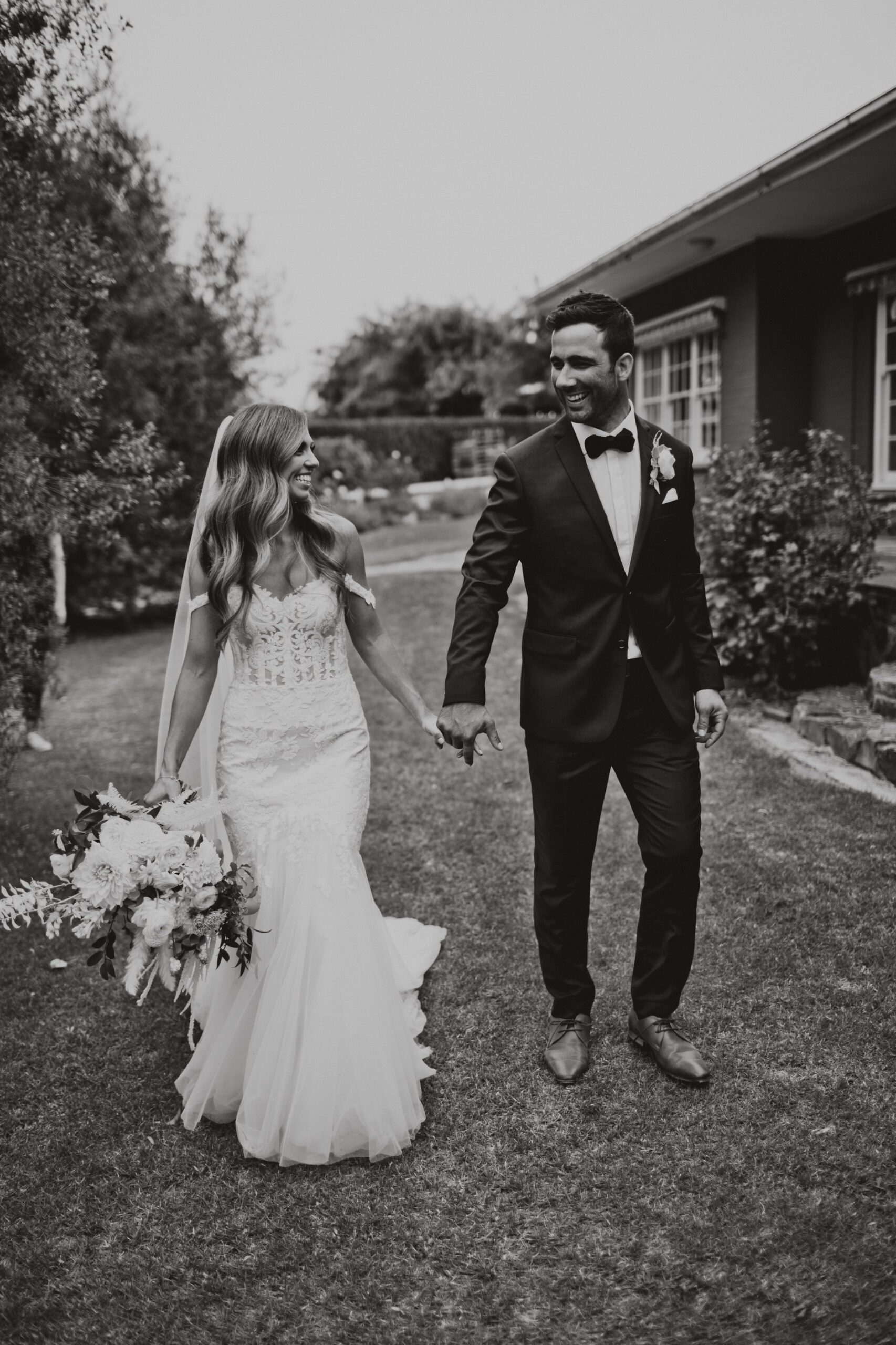 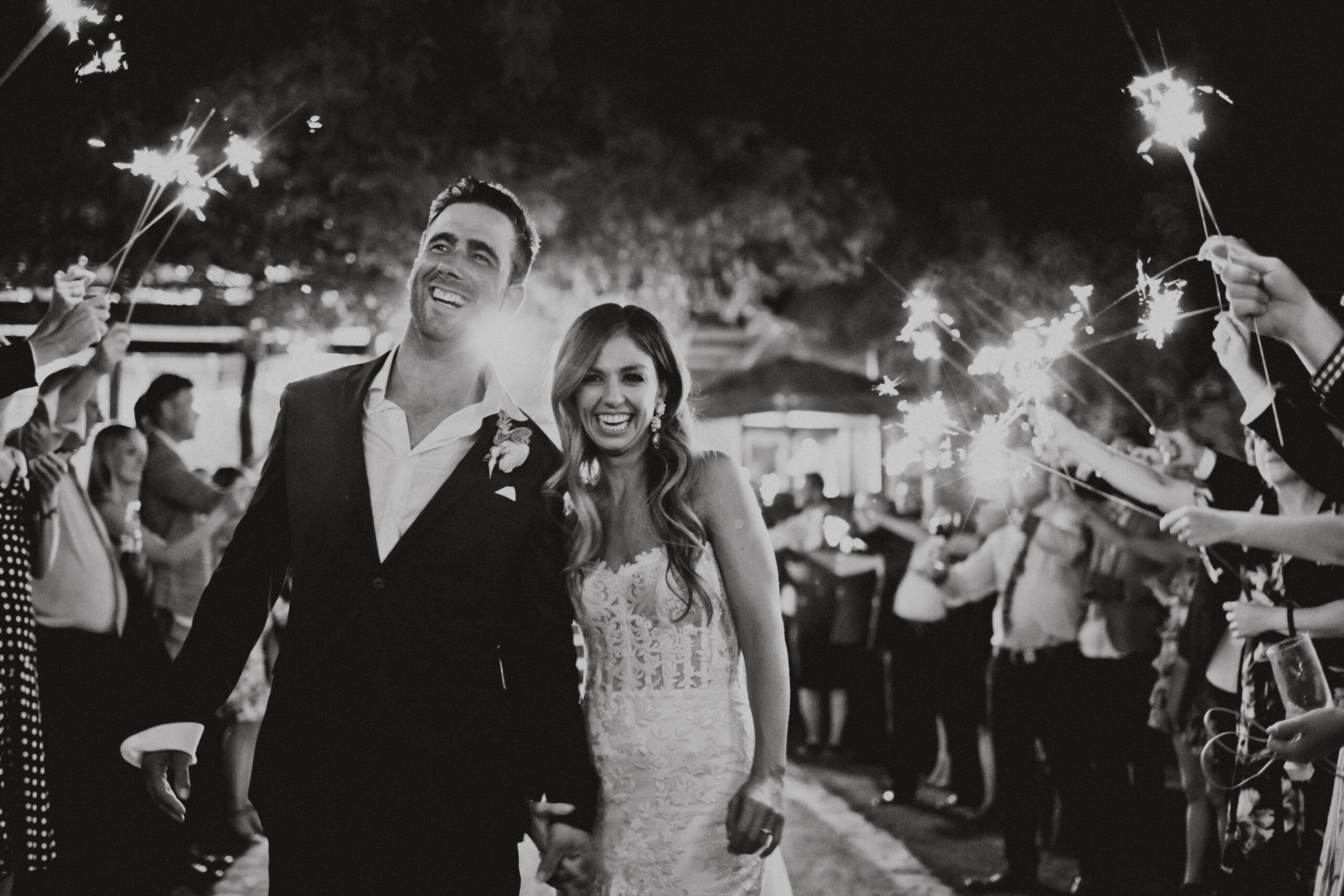 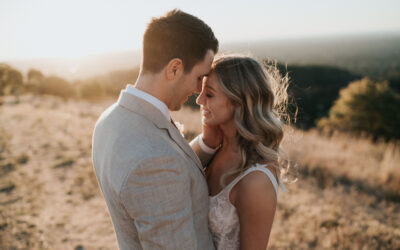 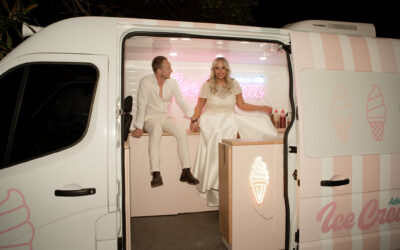 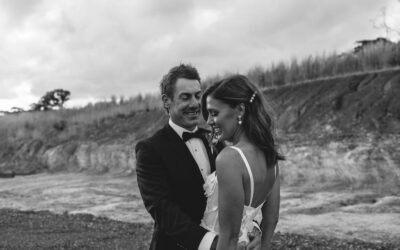